I switched to command line and tried to run some SSO Util commands to make sure my password worked and then everything became very clear. I have a bad character in the password. In the password I set during install, there is an “&” (ampersand) and in many console languages this has a special meaning. When running some rsautil commands using the master password VMware&77  I get messages like: “77” is not recognised as a command.

In my homelab I installed a fresh new SSO just for this test. During installation I set the master password to: VMware@55. Then I tested my rsautil command: rsautil manage-secrets -m VMware@55 -a list. This worked, I got a list of … well things.

I then changed the master password using this command: rsautil manage-secrets -m VMware@55 -a change -N VMware&77. This should set the old password to the new password “VMware&77”. Check the output below and notice that the rsautil did perform the change, but also reports an error. Trying the list command with the ‘new’ password, didn’t work. 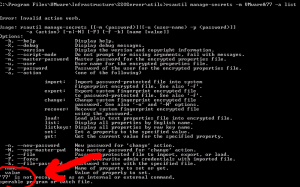 What had happened is that the master password was changed to “VMware” and everything behind the & was lost. Proof would be if the rsautil command would work with the “VMware” password and it did: rsautil manage-secrets -m VMware -a list.

I did a new test. I removed SSO and the SQL Express database and again installed SSO using the master password “VMware&123” to see what would happen. Login through the Web Client works using the user admin@system-domain and password VMware&123 but the command line tools don’t work. 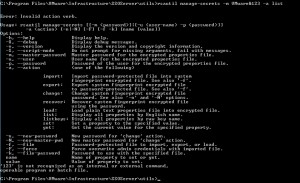 My advice is to use a master password that doesn’t have the & in it. I tested with @ and that works fine. Using the exlamtion point ! also has some issues sometimes, so I would stay away from that too. And the release notes already mention that a space in the password will also get you into trouble.

Seems my friend Christian Mohn is better in using Google than me. He found a mention of this issue in the following KB: “vSphere 5.1 Single Sign On (SSO) installation fails with error: Error 29133. Administrator login error. (2035820)“. The KB article mentions that this issue is resolved now, but as you can see, it isn’t.

In some situations it can be fixed with: rsautil manage-secrets -a change     I’ve also tested this in my home lab and somehow it didn’t work, later on I tried it in production because everything else had failed and it worked !!!