Customer had all his VMware databases for vCenter Server, Update Manager, Single Sign On (SSO), vCloud Director and vCenter Chargeback running on one big SQL Server where they shared resources with other databases. They asked me to move the databases to a new MS SQL Server because the load of the VMware databases was more than expected. I prepared the move by reading a few VMware KB’s that described how to move the databases, but still experienced some issues, that is why I wrote this blogpost to have a good manual for the next time I have to move these databases.

This first post shows how to move the SSO database.

Before the actual move, make sure that you’ve read the following KB: Updating the vCenter Single Sign On server database configuration (2045528).  Since we also have to move the database, which is not described in the mentioned KB article, there are some extra steps to perform. This post only works for MS SQL Server.

When running the queries, make sure you run them against the correct database. See image. 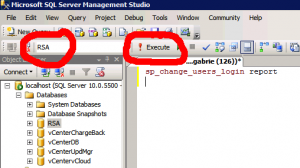 Next step is to create the RSA_DBA user which is only a SQL Server user and not a database user. But this user should become the owner of the SSO database.

Your database is now ready for use. We just have to tell the SSO Server that it should look somewhere else from now on. To do this run the following on the SSO Server:

Now cross your fingers and start the SSO Service. Check if you can logon to the SSO Server: https://<your SSO server>:9443/vsphere-client/ Login with:  admin@system-domain