Putting your storage to the test

Doesnâ€™t everybody want to brag about how fast their storage is? How they configured and tweaked for hours to squeeze the last bit of IO out of their storage? But what does it mean when someone says: â€œMy box can do 1200 IOPSâ€. Is that read speed, write speed, what block size, is it a mix of reads and writes?

Recently I received an Iomega IX4-200D from Chad Sakac ( http://virtualgeek.typepad.com ) (Thank you very much Chad!!!) and I of course wanted to put it to the test and see how many IOPS the IX4 could give me. Biggest question was however: â€œHow to test it thoroughly and in a sensible wayâ€.

Searching for proper documentation on this, I stumbled upon the â€œOpen unofficial storage performance threadâ€Â on the VMware Communities forum. This thread, originally started by ChristianZ,Â is running for quite some time now and is very popular since many forum members contributed to the thread showing the performance results of their storage. Christian has created a performance test using the tool iometer which will test your storage using four different testing patterns.

Another test I found was at the ReadyNas website with an even more extensive version of this test called the â€œSuper ATTO Clone patternâ€. This test performs a number of read and write actions that are fully sequential but differ in block size. Starting with read of 0.5K blocks, the block sizes doubles each run to a max of 8MB block sizes. There is a similar write sequence this test performs.

Note to author of the Super ATTO Clone pattern: After downloading the zip file containing the config file, I was unable to find what link I downloaded your test from. Please e-mail me so I can give you credit for your work.

Purpose of the test

Itâ€™s always good to know what you want to proof when testing. From my tests I want to learn the following:

The Iomega IX4-200D in my lab, has 4 disks (ST31000520AS) of 932GB each and I created a Raid5 volume on it, which leaves me 2.7TB effective storage. On this volume I created a 1.5TB iSCSI volume that was presented to all three ESX hosts in my lab. The disk write cache setting is enabled.

The ESX hosts are all running vSphere 4U1 (build 208167). When performing a test I made sure that the VM was the only VM running on that host. The only exception is the test where I run the test VMs on all three hosts at once. In that situation the first ESX host would run 5 VMs that are needed for my basic environment but they draw almost now performance at all. I also couldnâ€™t spot differences in results between the VM running on the loaded ESX and the VMs on the empty ESX host.

Each test VM was a clone of the first test VM running Windows 2003 Server, which has 1024MB RAM, 1 vCPU, a thin provisioned boot disk of 10GB connected to the LSI Logic virtual controller and a thin provisioned 50GB disk connected to the Paravirtual SCSI controller. The file system on the disk is NOT aligned; the VMFS volume on the iSCSI target is aligned by vCenter during creation. On the same 2.7TB volume the remaining space is used for a NFS volume, also presented to the ESX hosts. All devices (ESX hosts and IX4-200D) are connected over 1Gbps links through a Linksys 8 port SLM2008 switch.

Since my ESX hosts are white boxes and my 1Gbit switch is a SoHo switch I wanted to rule out that one of them (or both) would be a limiting factor. I therefore performed a series of test to proof that the IX4 would give up before my network, ESX host or VM would.

On ESX02 I started VM01 (disks on the iSCSI volume) and performed the first set of 4 tests. Then I started VM02 and VM03 on the same ESX02 and ran the same set of tests. The combined throughput of all 3 VMs was at 92% of the throughput of the single VM with each VM performing at 1/3 of total. The last test I ran was to run all three VMs on separate ESX hosts. The combined throughput was again 94% of the max throughput of the single VM and again each VM performed at 1/3 of total. In other words, no matter how you spread the load I never got a better throughput than on the single VM running alone. From which I draw the conclusion that my network isnâ€™t the bottleneck, nor are the ESX hosts or the VMs.

Now for the iSCSI results

The moment weâ€™ve all been waiting for. First test I performed is with VM01 running on a completely free ESX host (no other VMs on that host) and no other action taking place on the IX4-200D. I ran the four tests I mentioned in the beginning.

The following results are from the â€œMax Throughput 100% Readâ€ test, performed on three VMs at the same time, each VM running on a single ESX host.

As you can see the total MB/sec and IOPS of the three VMs is at 94% of the performance of the single VM in Test 001a.

A more difficult test that most storage systems have problems with is performing a real life test. To see how much this would impact normal throughput, I ran the â€œReal Life testâ€ on VM01 and the â€œMax Throughput 100% readâ€ test on VM02 and VM03 with all VMs again on different ESX hosts.

As last test I ran â€œSuper ATTO Clone patternâ€ test that performs read and write actions with changing block sizes. This test can help you determine the ideal block size for the file system you want to run. 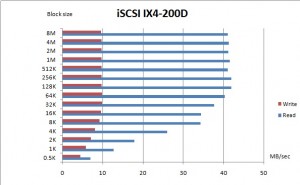 When looking at the graph, you can see that block sizes below 64K are sub optimal. So in theory I could get even better performance in the â€œMax Throughput 100% readâ€ test when I would run the test again but now using 64K blocks instead of 32K blocks. Well, for this test that might be true, but applying the same logic to the â€œReal Life testâ€ which uses 8K blocks, wouldnâ€™t be fair anymore since there you want to test real life performance and 8K blocks is considered real life behavior (more or less).

Conclusion of this iSCSI test is that I can read at 55MB/sec from the IX4-200D and have around 1761 IOPS in most ideal situation. Ideal, because you will seldom have only read actions on your storage.

The second conclusion I want to draw is that 64K is the optimal block size for the IX4-200D as this is the point where it reaches the best throughput when looking at read and write speeds.

This concludes my first part. In the next part I will show you the performance of the IX4-200D when using NFS and give you download links to the data I gathered.